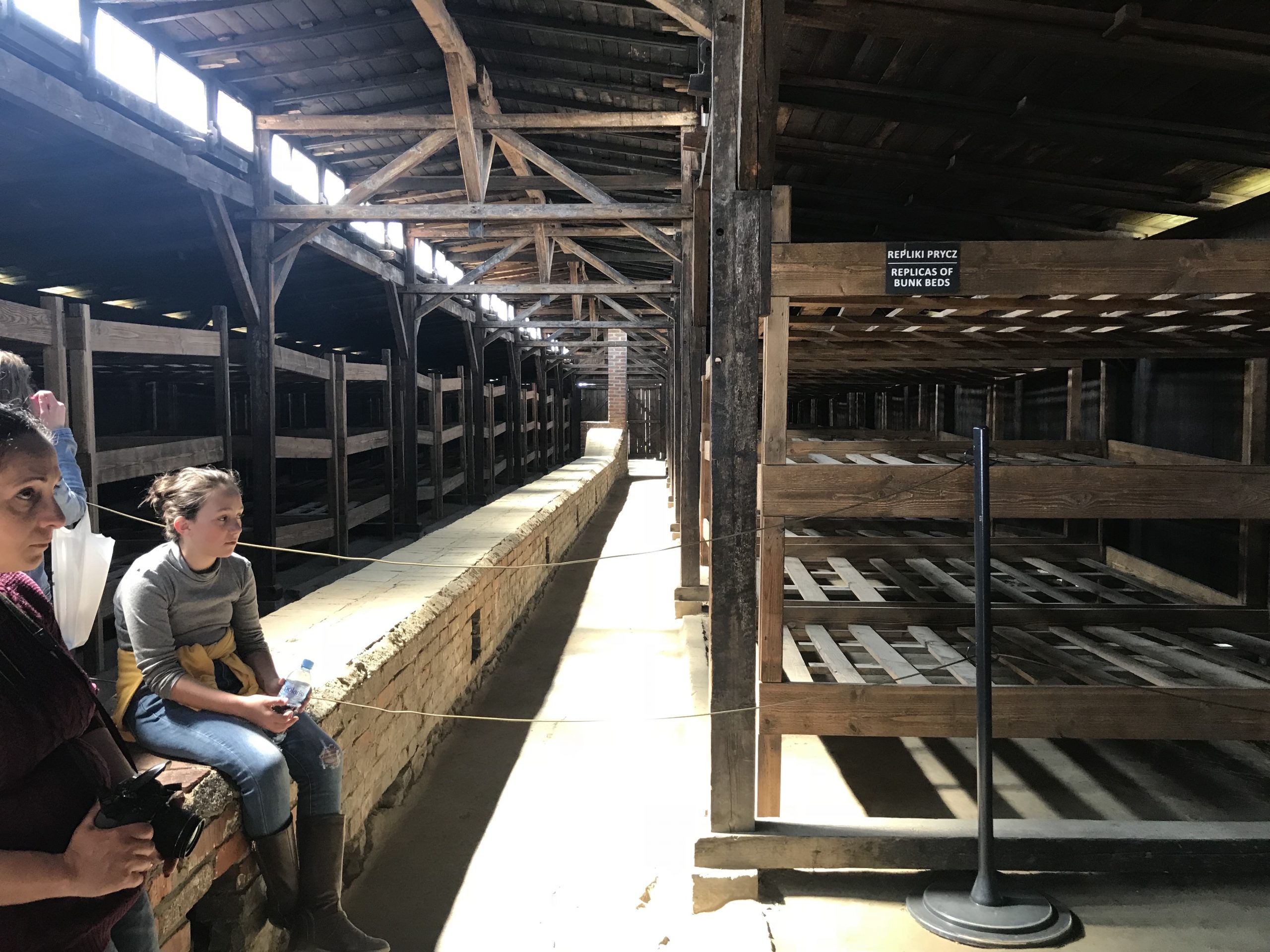 A year ago we celebrated Easter in Krakow, and Good Friday we visited the Auschwitz camp. Good Friday I have always thought as a gloomy day, so it was quite suitable to visit the infamous concentration camp.

The visit to Auschwitz and Birkenau was at the same time a travel back to the vivid stories by nuns from Poland in the sixties in St. Frans school in Tórshavn. It must have been well explained, because although I had not prepared for the visit, it was just as explained, and nothing unexpected occurred.

In particular I remembered the story on the priest Kolbe, who volunteered to take on the punishment for another prisoner. The punishment was to starve to death in the basement of one of the buildings in Auschwitz. We went to this basement, as a whole a gruesome place. However, a memorial was for the priest Kolbe in one of the cells, and this memorial enlightened the darkness all the way back to the school bench in the sixties in Tórshavn.

The visit to Auschwitz and Birkenau was efficiently arranged. We were collected by mini-busses and drove to Auschwitz, where we were arranged in larger groups with tour guide, which in a quite militant way “herded” us as a controlled flock through Auschwitz, where we learned about the laboratory Auschwitz, which was the foundation for the “production unit” Birkenau. – No obstacles at all, and we allowed us to be herded with the flow from one building to another, and through passages along cells and rooms with exhibitions. It was not possible to stop, because there were so many people everywhere, and if we stopped, then those behind us pushed. In a way you got a sense of how it could have been being there.

It is scary to observe how easily we allow us to be herded, and allow things to pass, which we would have liked to stop by, but which do not fit into the human flow we are in. In Birkenau it seemed as there were more breathing space, probably because of the wider area, but it is even more gloomy than Auschwitz. When Birkenau was active it was crowded, because between 400-1000 prisoners lived in each barrack. The barracks were copies of German horse stables, that could take 51 horses. Here was large-scale operations, no hope and no respect. How can it be that things like this are accepted?

A sort of comfort it is to see the memorial plaques that different countries have placed. However, when considering that since second world war there have been several genocides of different types and scales this comfort is rather ambiguous. What is it in us humans that allows things like this to happen, and is there any hope?

When compared with fantasy stories who often are about the struggle between the evil and the good then in the stories it always turns out that there is hope, and in the hope lies that there are some people, that have the will to resistance, and courage to fight for what is right.

And these are also the stories on the concentration camps in Auschwitz. There are many stories on people in the area around the camps who did not accept how people were treated in the camps, but actively tried to help the prisoners. Many of them were captured and executed.

The pope’s Easter message was on the same issue: We need to cooperate on our common goods, and at the same time we can not accept indifference, self-centredness and division. And we can’t allow us to forget those that right now are living under unbearable conditions such as war, poverty and diseases. The hope is that we care for them in our present time.